Gundy is here to inform you of several mind-blowing facts:

So let’s get physical, bitches!

“I have never not loved Olivia Newton-John.”

Have You Never Been Mellow

To be honest, Gundy has never quite understood this song. Gundy gets slowing down to “smell the roses” and all that. Gundy just never quite got the part about letting someone else be strong.

ON-J is strong.
JH is strong.
Neither of them needs anybody to be that for them.

Gundy must say, the connotations of this song are a little… “non-consensual”? Seriously, come on:

This is a song about an individual who doesn’t take “no” for an answer. This person is pretty much unavailable and we’re hoping that affection will bring them around. Both JH and ON-J know the target of this song will come around, and they’ve got just the thing.

Even the hardest of hearts would surely melt in the face of this kind of devotion. Gundy’s certainly does every time he hears it.

JH’s version has this chunky, angry bass that brings a sassy tenacity to this song. Not that ON-J doesn’t know what’s up, but JH is coming at this relationship with a bit more resilience.

Gundy challenges any HCK reader to NOT sing along:

Gundy knows you readers are all gooey masses of tears and drippy hearts. Go have yourself a good cry.

Let Gundy tell you about Xanadu.

When a young Gundy first saw Xanadu in 1980, he was already well infatuated with ON-J. Pity whichever of his two divorced parents Gundy must have dragged to the theater to see this film.

It does NOT hold up and perhaps it never did. Young Gundy loved every minute. 1980 Gundy was a young Sonny Malone in his own right: an artist and a star-gazer, looking for his muse.

“Fine, I will take the nine-year-old dreamer to the record store so he can own the soundtrack on vinyl!”

However, once these pivotal, life-affirming treks were made, Young Gundy was content to stay in his room and play that record over and over. It still bears the pencil scoring on its cover where young Gundy traced over that image of ON-J holding up the big neon ELO logo. He never quite got the curve of ON-J’s legs just right.

The JH version of this song brings a rawness, yet spares none of the allure. That Xanadu muse has been replaced with a garage band goddess with a Casio. Less “magical”? Perhaps. But no less beguiling and perhaps that much more accessible. Gundy, both Young and Old, would gladly climb into the back of her beat-up tour van just as readily as he’d strap on neon-trailing roller skates.

1981 wasn’t just the magical year that ON-J released the album Physical. It was also the year that Jane Fonda released her workout. Aerobics were sweeping the nation. Even Louie De Palma made a reference to “Jazzercise”. Everyone was going to classes and working out, so of course ON-J, savvy and astute, was capitalizing on the craze.

Jane Fonda, ON-J… Even JH had her own workout video:

But for some reason, here she is making a new one anyway:

Make A Move On Me 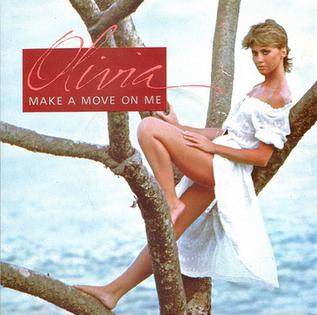 Gundy distinctly remembers staring fondly at the cover of the 45 cover of this… The fuck-? “What’s a ’45’?” You son of a…

Just look at ON-J! How did she get in that tree? Does she want Gundy to climb up there with her? Does she need rescuing? Will her golden thigh be exposed as Gundy’s strong arms ease her down from those scary heights, into his warm, ocean-kiss’d embrace?

I’m the one you want
That’s all I want to be
So come on, baby
Make a move on me

Gundy had the 45 record of this song, the B-Side of which… What? What the hell did you just say? “What’s a ‘b-side’?!?” Don’t you have Wikipedia, you snot-nosed shit?

The B-Side of “Make A Move On Me” was “Promise: The Dolphin Song”. ON-J sang a freaking tribute to how amazing dolphins are on the back of a sexy, seductive, come-hither fucking ANTHEM. “They deserve to be treasured as a source of LOVE!”

No, Gundy is NOT crying. Shut up.

Gundy does not know if JH has ever sung about dolphins, but her version of “Make A Move On Me” is an ass-kicker.

You can donate to the Olivia Newton-John Cancer Centre (ONJCC) here.

You can buy Juliana Hatfield Sings Olivia Newton-John on her Bandcamp page or on her website.

Gundy is not sure if any of those contributions go to dolphins, so here’s a link for that.

Hopelessly Devoted To You

If Gundy ever did karaoke (he won’t), this would be the first track he’d reach for. The room would consequently clear after the first high note, but this is beside Gundy’s point.

You’ve been “hopelessly devoted” at some point in your sad, limp life and it’s the fucking human experience distilled into a song about weakness and giving in and you have that, somewhere, in your cold, tar-thick heart somewhere and when no one is watching you drag it out and toast to it with a glass of your own salty tears.

Gundy never gave this track much of a listen before JH recorded it for the Ears of the Lucky.

At first listen, this is a country track, and yeah, that’s another strike against it. But shut the hell up for a second…

If you’ve ever been in a bar or restaurant, or hell, the f-ing grocery store, and that song came on that brings you right back to the one who broke your heart… You have a track B17 of your very own and you would straight-up murder “some button-pushing cowboy” for putting it on CUZ IT’S OVER.

There are probably some other songs on Juliana Hatfield Sings Olivia Newton-John, but Gundy has somewhere he needs to be very soon. He is out of tissue and SHUT UP.

In conclusion – ON-J is awesome and JH made an awesome tribute to her greatest hits. Gundy insists that you throw scads of money at both of them in the hopes that they will continue to make mind-blowing music or to simply thank them for the music they have made.

Gundy doesn’t expect your hard, black hole of a heart to understand what this music means to him. Hell, Jonny Assdirt is probably just going to use this against him the next time Gundy tries to promote a new venture.

The gauntlet has been thrown. Just try not to think about either (or both) of these amazing ladies the next time you are bored with your Pearl Jam or your Lemonade or whatever the sweet fuck the kids are listening to.

Maybe you’ve got a B17 of your own. Maybe you’ve kept your own Sonny Malone under wraps for too long. Gundy (and ON-J AND JH)  says, “Don’t let your aim ever stray”.

A million lights are dancing and you are, a shooting star